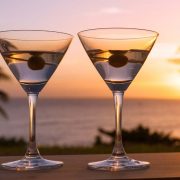 …A Shake Through One of History’s Most Emblematic Cocktails…

Today we are shaking things up and offering some tips on how to make classic martini’s at home! Today we’re talking about a Classic Martini : How To: 2 Ways! Dry with a twist, and Dirty!

Check out our Classic Martini: How To Video!

Traditionally, the Martini was a cocktail composed of just two ingredients: gin and vermouth. The drink was typically garnished with a twist of lemon or olives.  However, since its inception – the Martini has become one of the most iconic, well-known alcoholic beverages in the world. They’ve come a long way from the start. Let’s take a quick look at the Martini’s transformation through the decades…

The name Martini came from the brand name used by an Italian producer of vermouth in Italy, Alessandro Martini.  Still today, arguably the most well-known brand of vermouth.

The Martini reached its height just in time for the roaring 20’s! At this time the Martini was comprised of London Dry Gin and Dry Vermouth in a 2:1 ratio, stirred over ice, and served strained into a cocktail glass.  At the time of the United States’ prohibition legislation, the illegal manufacturing of gin was relatively easy. This led to the predominance of this cocktail during this time. After Prohibition ended, the availability of quality gin led the drink to become progressively drier – that is, over time, the amount of vermouth in a Martini became less and less.

It even became the norm to rub a finger with vermouth on it around the rim of the glass for just the “essence” of the botanical aroma. Or as Winston Churchill did – chilled his gin and “bowed in the direction of France” (another large producer of Vermouth). As the Martini evolved, it moved further and further from its roots and became anything but.

By the 1970’s and 1980’s, the Martini was considered antiquated. The 1980’s brought about more complex and elaborate cocktails like Sex on the Beach, Long Island Iced Teas, Tequila Sunrises, and Mudslides.

But in the mid-90’s, drinks served in a Martini cocktail glass gave the word “-tini” a whole new meaning.  A new wave of cocktails like the Espresso Martini, Appletini, Chocolate Martini took on the catchy suffix – but were made with vodka and other ingredients – not including dry vermouth – and therefore lacked any commonality with a true Martini.

Today, Martini’s are enjoyed in many fashions.  Perhaps one of today’s most common orders for a Martini often implies folks are just asking for straight vodka chilled over ice – which isn’t really a Martini at all…

Nonetheless, bartenders everywhere have their own unique twist on, and favorite variation of, one of the most symbolic cocktails in history.

Here’s our recipes from the Classic Martini : 2 Ways video… and a bonus Appletini Recipe!

Twist a lemon rind (with twist-tool or a pairing knife – CAREFULLY!)

What is YOUR favorite Martini? Tell us what recipes you’d like to see!

For more information, and tips on throwing the best dinner party : visit our blog or check out our Pinterest Page!

Any cookies that may not be particularly necessary for the website to function and is used specifically to collect user personal data via analytics, ads, other embedded contents are termed as non-necessary cookies. It is mandatory to procure user consent prior to running these cookies on your website.